Pudding
1. In medium saucepan combine sugar and cornstarch. Stir in milk. Cook and stir over medium heat until mixture is thick and bubbly
2. Cook and stir for 2 minutes more. Remove from heat.
3. Gradually stir 1 cup of the hot mixture into the beaten egg yolks.
4. Return all of the egg mixture to the saucepan and bring to a gentle boil. Reduce heat, cook and stir for 2 more minutes.
5. Remove from heat, stir in butter and vanilla.
6. Transfer pudding to a large bowl and cover the top of the pudding with plastic wrap. (the plastic wrap should sit right on top of the pudding to prevent a skin from forming on the pudding.)

7.  Place pudding in fridge for about an hour to cool.
8. In your serving bowl, add a layer of vanilla wafers to the bottom and one layer around the side (standing up.) Add a layer of sliced thinly sliced bananas.Meringue:
1. While the pudding is cooling, Place the egg whites into a large, tall bowl and set your mixer to medium-high speed, begin beating the egg whites.
2. Once the egg whites are forming soft peaks, add the sugar, 1 tbs at a time and beat for another minute.
3. Slowly add the vanilla and continue beating until you have stiff peaks. (The meringue is done when it is not runny and when you can hold a spoonful of it upside down and none of it drops off. Also when you swirl a spoon through it and the swirls hold their shape.)
4. Gently fold half the meringue into the pudding, until it is thoroughly combined. This is how it looks as you are folding it in.

5. Add half the pudding mixture to the serving dish.

6.  Add another layer of vanilla wafers and bananas.  (I always like to put the wafers around the sides of the bowl too. )

7.  Add the rest of the pudding and more vanilla wafers around the side (push them down into the pudding.) 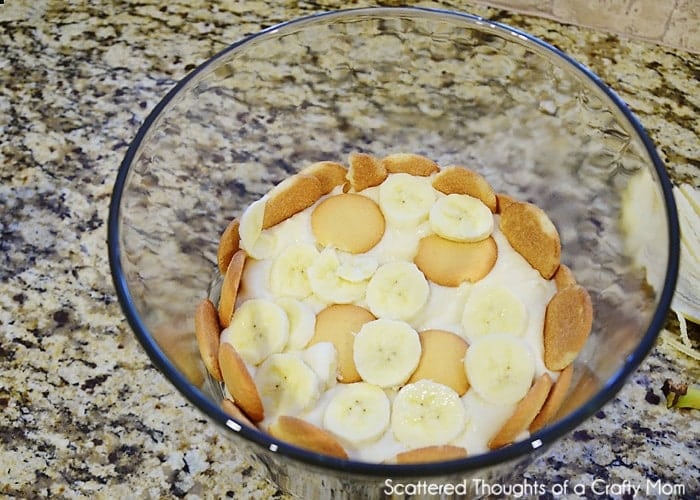 Cool and serve. Store any leftovers in the fridge. (Pudding is even better the next day…)