Are you watermarking your photos?  If not, you should be….

I did not start watermarking on a regular basis until I had been blogging for about a year.  I’ve gone back and watermarked a few of my more popular posts and tutorials, but didn’t bother with everything.  There were just too many and some of the photos weren’t great.  I never would have thought someone would want to steal a photo that was taken in bad light or just not very good.

Well, I was wrong!  People will steal anything!  Case in point, my meatloaf stromboli recipe.  It was an original and semi creative idea, and I guess that is what the thief was looking for…

I came across my photo on pinterest and noticed it was linked to something else, though that link was dead.  So I used google’s reverse image search to track down the thief.

Look at how many comments, likes and shares this guy got off my picture: 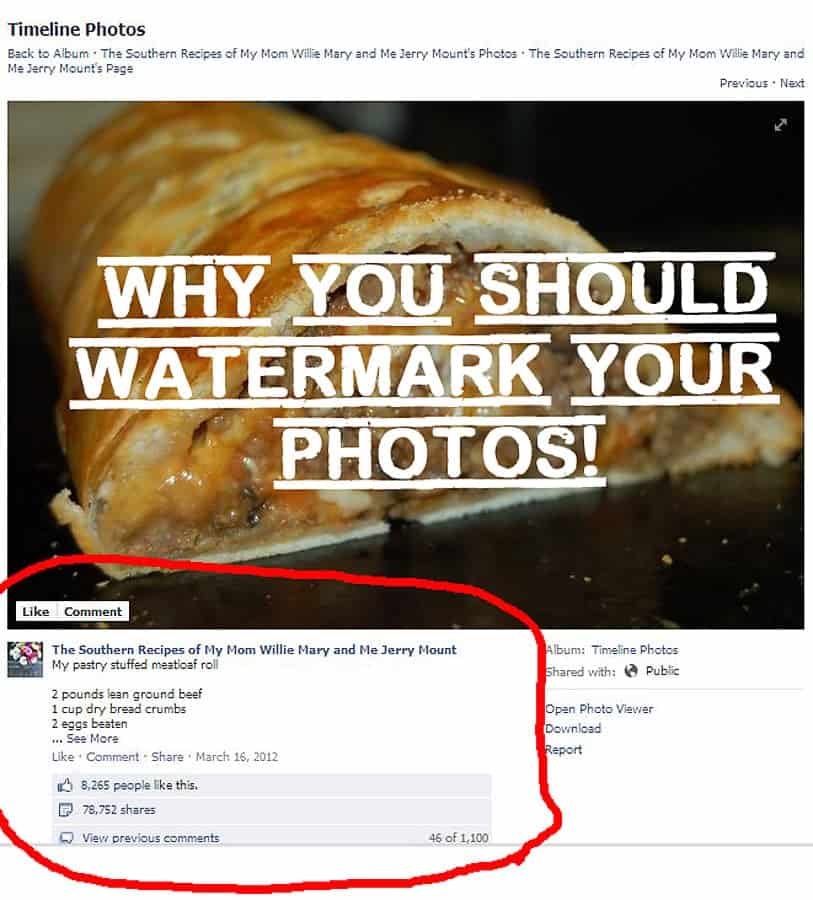 The worst part is, this guy just made up a similar recipe to go with the photo and quite a few of the comments were that the recipe failed.  Of course it is going to fail if you don’t follow the right recipe.  (I used refrigerated pizza crust and leftover meatloaf.)  I know he made it up, because he thought the dark things in the picture were olives, but they were actually lentils I had hidden in our meatloaf.

Of course this is nothing compared to some of the stories I have heard, but I am still very annoyed!!!  I am going try to figure out how to report this to facebook, but we all know how facebook is…

Anyway, I use photoshop elements to edit my pictures and I have created a brush to add my watermark.  Here is the tutorial I used to figure out how to do that.

And if you don’t use photoshop or photoshop elements, here are a few other tutorials and methods you can use to watermark your pictures:

Watermark all your photos at once using free software

Using Picmarker (I don’t know about others programs, but this one will watermark your facebook photos too)

Now, go watermark your pictures!!! (Let’s be sure to help others, spread the word by pinning this or give it a tweet or + on google!)