Tired of the same ol’ bland chicken dishes in your slow cooker?  Then this Cashew Chicken Recipe may be exactly what you are looking for! 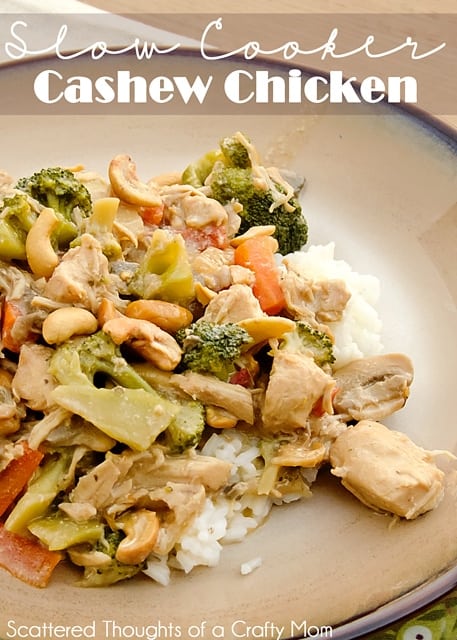 I don’t think I have ever actually had Cashew Chicken before, so I wasn’t sure what to expect. (I am usually a sesame or teriyaki chicken kind of girl.)  I found this recipe for Cashew Chicken in a old Better Homes and Garden magazine and judging by the ingredient list, I figured it would be good.

And it was…  I especially enjoyed it cold the next day for lunch!

I made a few changes to the recipe which I am certain only improved it.  Like adding the veggies at the end instead of the beginning, can you imagine how gross and mushy would be it they cooked for 8 hours?

While we are on this subject of magazine recipes… I have to say, I think a bunch of their photos are fake and recipes must be untested- at least the ones in this magazine from 5 years ago are.

There is absolutely no way the recipe will turn out as photographed.  I tried another recipe from this same book for an overnight creme brulee french toast in the slow cooker, and it was a disgusting slimy mess that went straight into the trash.

BHG must have baked it in the oven for the picture.  After that disaster, I looked up the recipe on the internet and found the original it on their site.  There were about 22 other reviews with others having the same results.

Cashew Chicken in the Slow Cooker

adapted from Better homes and Garden Magazine
Serves 5, calories w/out rice: 289 per serving