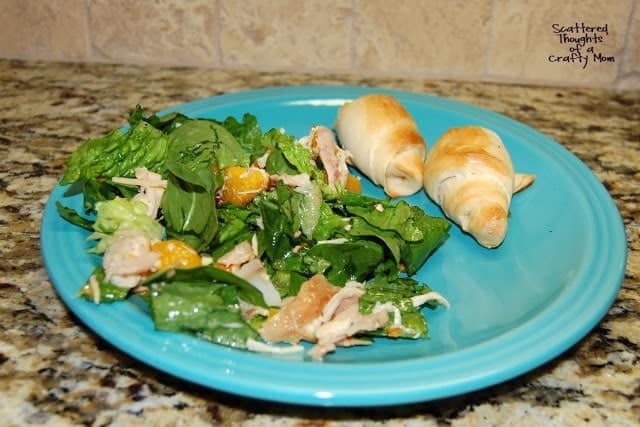 This Asian Chicken Salad is based off a recipe I found in a cookbook from Costco.  I didn’t have everything the recipe called for so I made a few substitutions.  My husband really enjoyed the salad and the kids nibbled at it enough that I deemed it a successful salad.

The rolls were homemade.  We ate them up, but they did not come out as light and flaky as I expected.  I am going to try the recipe one more time, but I will proof the yeast before adding it to the bread maker.

For the dressing, instead of making it from scratch, I used my favorite Asian Sesame dressing.  I have tried quite a few different brands, but this one is the best IMO.  It is hard to find though.  This is what the bottle looks like: 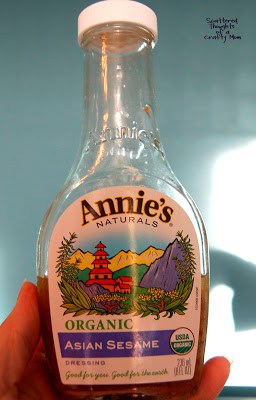 Here is the recipe:

8 cups of Romaine lettuce  (I used half romaine/baby spinach)
1 1/2 cups of shredded rotisserie chicken  (use more if desired)
1/4 cup chopped green onions
1 can of mandarin oranges
1/2 cup sliced almonds, toasted (I just chopped up some raw almonds)
3/4 cup of crispy Chow Mein Noodles (I was out of these 🙁  they keep disappearing from my pantry…)
+/- 3/4 cup of your favorite Asian Sesame Dressing (See bottom of post for Costco’s dressing recipe)

I will be linking up to the some of the linky party’s listed here.