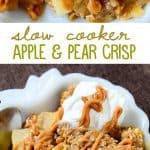 This Slow Cooker Apple Pear Crisp recipe combines cinnamon, oats, and nuts over slow-cooked apples and pears to make an unbeatable fall dessert!  The best way to serve this Apple Pear Crisp made in the slow cooker? Warm over vanilla ice cream and topped with caramel sauce. SOO good! 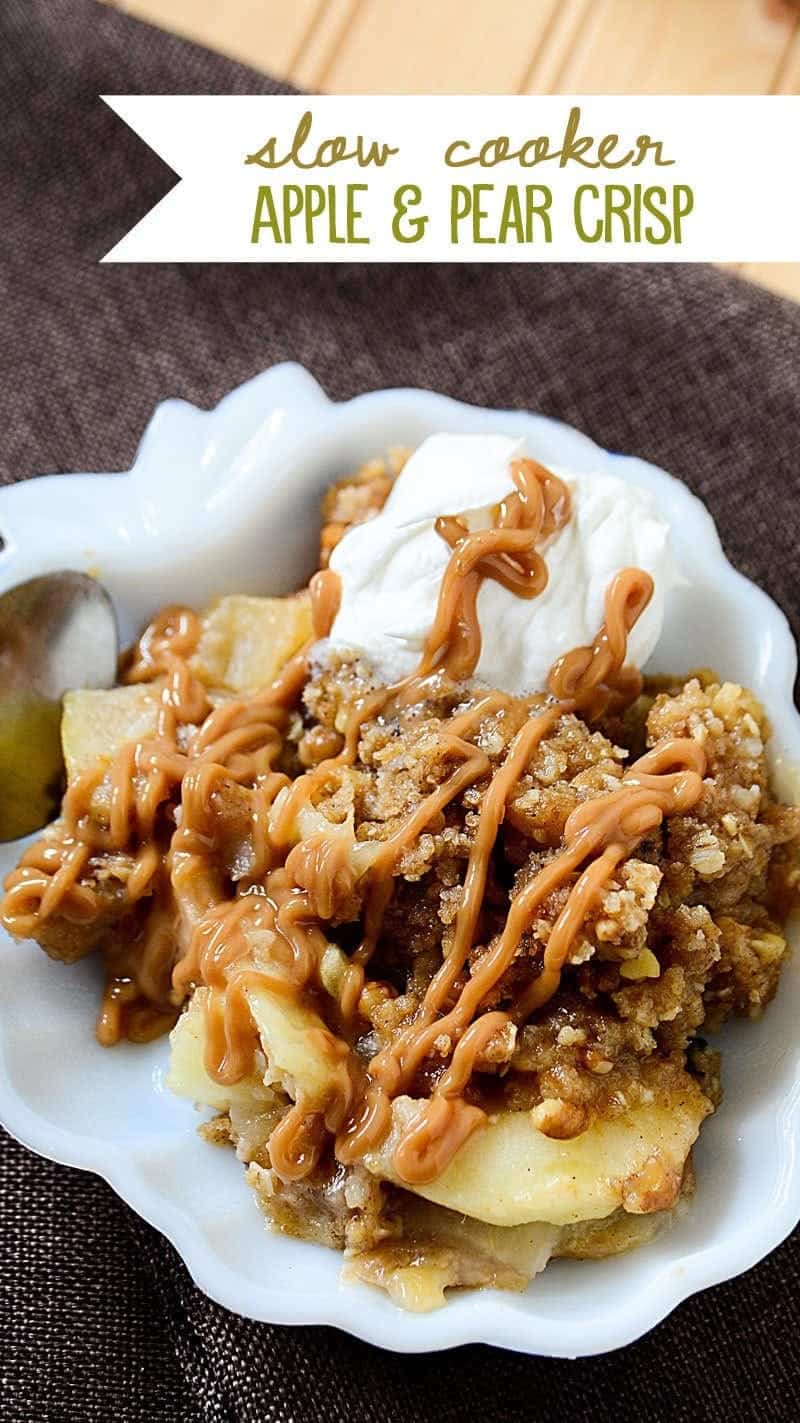 This Apple Pear Crisp Recipe is made in the slow cooker and, honestly, it’s one of my favorite slow cooker desserts for fall.

It’s one of these desserts that just “feel” like chilly fall nights, cozy and warm.

This Apple Pear Crisp is very similar to my Slow Cooker Apple Crumble recipe, with the addition of pears. So if you loved that, you’ll love this.

The pears add a bit of a surprise flavor and offer a slightly different texture variation from the apples.

I actually also love baking with pears in the fall but never incorporate them into as many recipes as I do apples. I definitely need to start experimenting more! 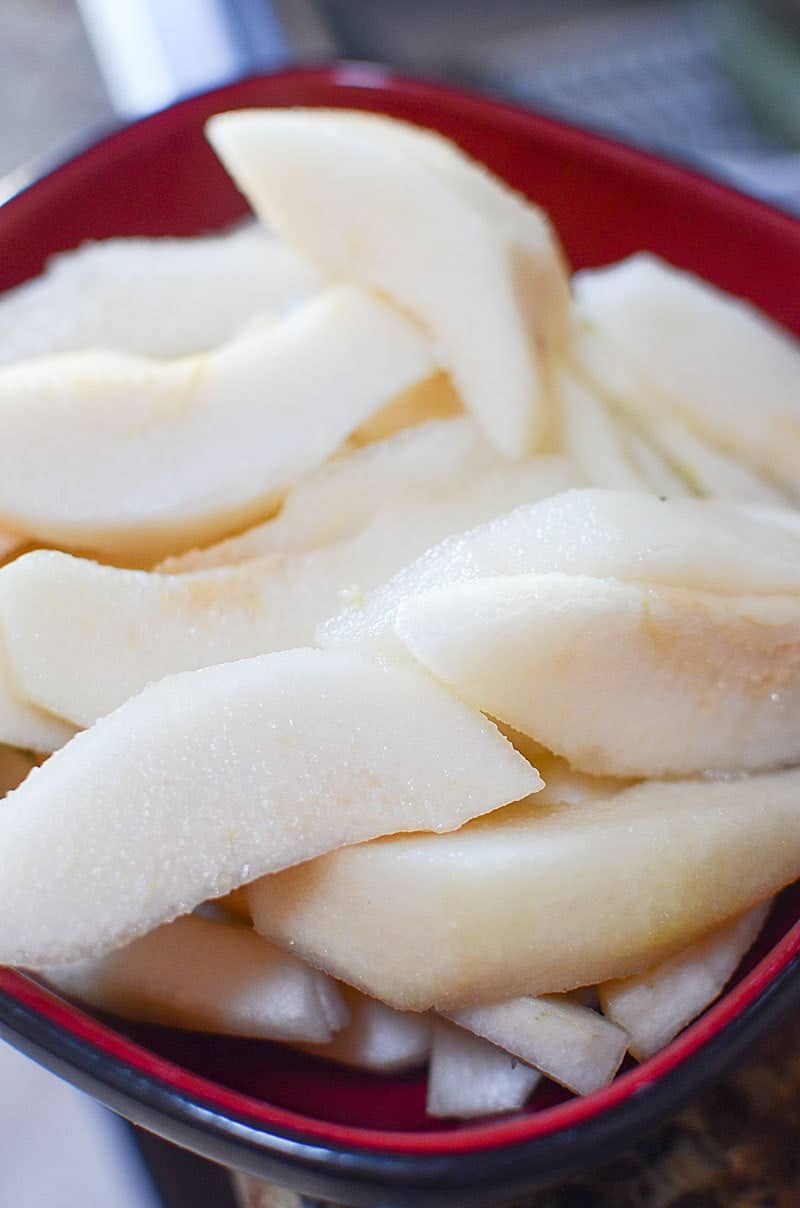 How to Make the Fruit Crisp in the Slow Cooker:

You’ll love how easy it is to make a fruit crisp in the slow cooker.

The hardest part in putting together this fruit crisp is the peeling of the apples and pears. (Luckily, I still have my pampered chef apple peeler core slicer I got when I hosted a party about 15 years ago.  If you don’t know anyone who sells pampered chef, you can find these on Amazon too. Makes peeling fruit a breeze!)

And of course, you can always purchase already peeled apples at the grocery store.

Fruit crisps in the slow cooker are put together the same way as if you were going to bake the recipe in the oven, but you are using a slow cooker instead.  The cooking time will increase to 2 to 4 hours depending on if you set your cooker on high or low, but the benefit is you don’t heat up the kitchen.  (And if you live in the south, you know we still have plenty of 90 degree days all the way into November!)  See more slow cooker recipes here.

Since this recipe takes approximately 4 hours in the slow cooker, it’s a nice dessert to prepare before dinner and have ready by the time dishes are done, especially if you’re having guests over.

The recipe does call for a small amount of apple juice – if you don’t have any and don’t want to buy an entire bottle, you can easily substitute with lemon juice and water.

Can You Freeze a Fruit Crisp?

It’s not recommended to freeze an already baked (or slow cooked) fruit crisp as the topping will get mushy.

What you can do is prep the fruit and toppings separately, bag them up and freeze uncooked, that way when you are ready to bake or slow cook the recipe, all you have to do is dump the ingedients into the pot and cook.  (If cooking from frozen, don’t thaw first, just add 5 to 10 minutes to the cooking time.) 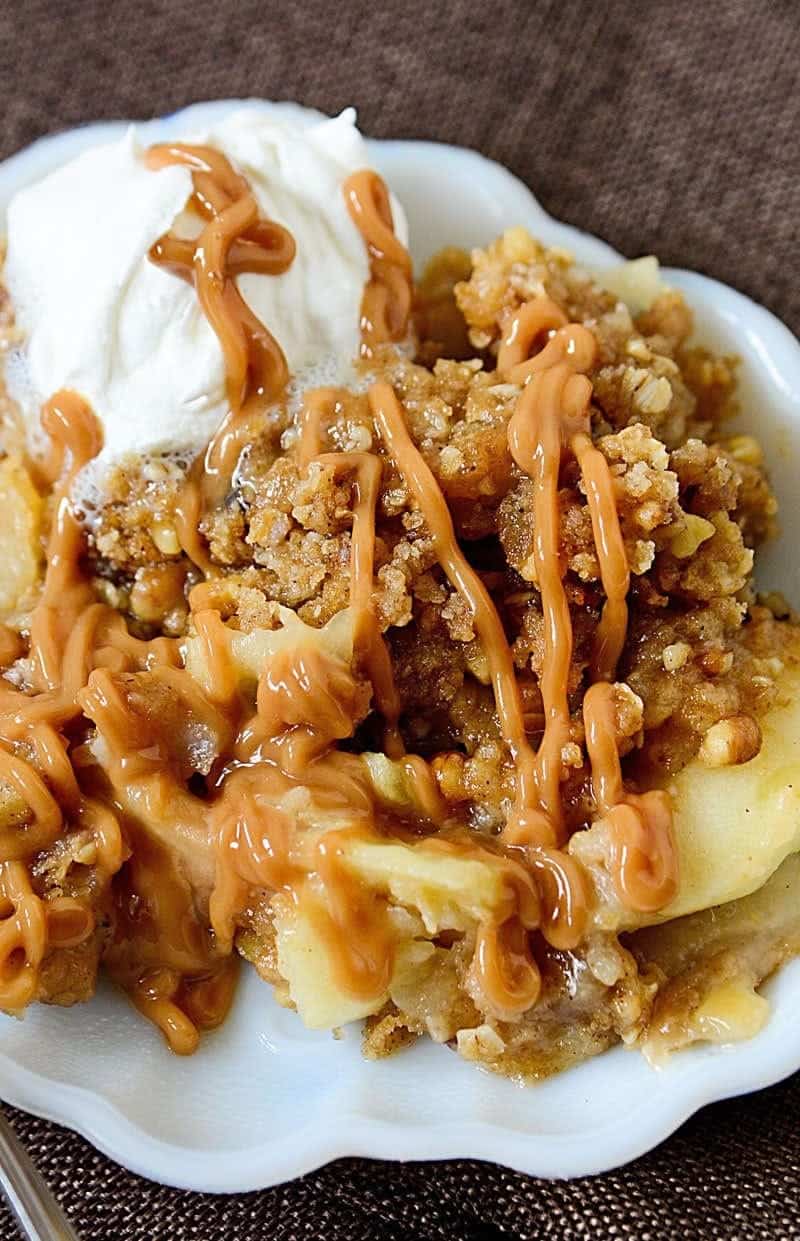 Love apples and pears in the fall?  Here are a few more apple recipes you might enjoy:

The best way to serve this Slow Cooker Apple Pear Crisp? Warm over vanilla ice cream and topped with caramel sauce. SO good! Everyone will be wanting more!

Recipe notes: if you don’t have apple juice, substitute 1 tbsp lemon juice, and the rest water.

The best way to serve this Slow Cooker Apple Pear Crisp? Warm over vanilla ice cream and topped with caramel sauce. SO good! Everyone will be wanting more!

If you don’t have apple juice, substitute 1 tbsp lemon juice, and the rest water.